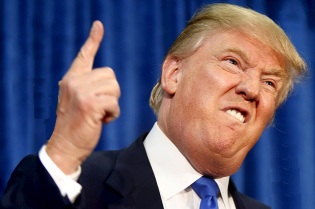 The Trump Thespian Society is known for famous actors. These include Mick Mulvaney with acting credits for both the Office of Management and Budget Director and Chief of Staff,  as well as such well known stars as , etc., etc., etc.

Ladies and gentlemen, tonight the role of Chief of Staff will be played by Mark Meadows.

. . . and several butchers’ aprons. And now, something completely different.

In order to save the American people from the coronavirus, President Trump has sprained both his thumbs as he attempts to twitter* away the disease.

* If one who runs is a runner and one who bakes is a baker, is one who uses twitter a twit?